I’m three days into a research trip to West Texas. Remote doesn’t do the area justice, at least not through these Midwestern eyes. We flew into San Antonio and took off for Terlingua, an eight hour drive to a semi-revived ghost town along the Rio Grande. The population in 2010 was 58, a number that I actually thought was low, but the majority of the people we saw were probably tourists. We stayed in the center of town which consisted of a half dozen stone houses, another half dozen mostly empty businesses, and a thriving operation run by locals Bill and Lisa Ivey. 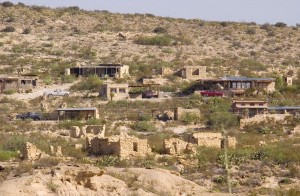 The Ivey’s establishment was the Big Bend Holiday Hotel, which had several traditional rooms as well as several renovated adobe/rock houses for rent. The locals primarily live in the stone ruins of the people who lived in Terlingua back in its glory as a mining community for mercury. We stayed in the Candellia house, a small adobe with stone walls and a separate bath and shower house. The house was beautifully decorated in remote desert style. The only downside was the packrat that entered our bedroom each night and left a trail on the floor when he left, but it wasn’t a big deal. The bed was high off the floor and the air conditioner drowned out any noise he was making…

We were definitely the outsiders in the community, but it wasn’t a negative, just part of the experience. The locals met up at the Starlight Theatre, a restaurant and live music stage just down the rock path from our house each night. The place received its name back when Terlingua was a mining town and a big wind blew the roof off of the movie house. We were surprised to find the parking lot filled with 10 – 15 cars both Sunday and Monday night. Before the music started inside, an ad hock band gathered on the front porch of the general store complete with a fiddler who also turned out to be one of the two river guides who led our rafting trip down the Rio Grande. The musicians and the crowd appeared to be mostly locals, an impressive number given the population statistics. 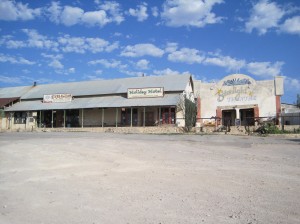 Our river guide, Jack, answered most of the questions I had as we drove the last hour through Big Bend National Park and finally reached Terlingua. How does a person, or a family, make a living in a town so remote that a person has to drive hours to find a department store – let alone a Wal Mart? Cell phone service? Forget it. Cable TV? No. The hotel did offer Wi-Fi which sort of worked – again part of the appeal. It appears to be a place where middle-aged people, many of them artists, who are fed up with society’s rules and norms come to live in peace on their own terms.

Jack said he has a great quality of life based on his own set of standards. He grows a garden that he supplements with water from the nearby creek (local water supply in the Chihuahuan Desert is sparse), and he uses solar power and a generator for his basic needs. When Jack married his wife twenty-five years ago he decided to settle down in the Rio Grande Valley instead of working rivers across the United States. But he said the life he leads here isn’t governed by the stress of an 8:00 – 5:00 time clock. His job is taking people on rafting and canoe trips down a river that he loves and knows intimately. Incidentally – Jack is 62 years old and paddled us down the Rio for 21 miles, dodging rapids and rock slides within inches of the boat. Impressive at any age.

Terlingua isn’t everyone’s dream; my two teenaged daughters couldn’t imagine life in a town so remote (and hot – it was 104 the day we rafted). The picture below is of the soccer field at the Terlingua High School. It might explain why the median age in Terlingua is 54. It would be a tough place to raise kids. 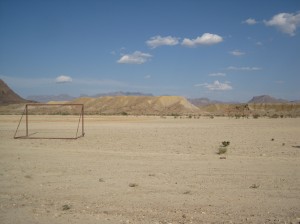 It was like no other place I’ve ever been to: the furnace like heat of late afternoon, the dusty ground, the lack of water and vegetation, the lack of people, the lack of shopping beyond gas and the basic necessities. But I understand the draw, the magic that the land has for the people that live there. It’s the reason I chose the area for the mystery series. It takes a certain personality to face the hardships that far West Texas delivers. But the tradeoffs are immense. The people that I observed in Terlingua didn’t want much to do with me or my family. We’re the tourists that pass through and throw enough money into the economy to make it livable, but we’re certainly not the reason these people live there. It’s the incredible beauty of the land: the vast open space and canyon walls and endless blue skies and slow flowing Rio Grande that rages up occasionally to put man back in his proper place. It’s knowing that you’re one of the few souls tough enough to make a go at a life that the rest of us are too soft to handle.